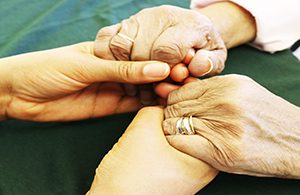 Eliza Bryant Village will launch a new Elder Justice Center to provide temporary respite care for the growing population of elders who are experiencing some form of trauma, violence, abuse, or criminal victimization, and to help to connect them to the various legal, financial and social service supports they may need to get them back into a safe situation.

Ohio Attorney General Mike DeWine announced on October 11, 2018 that his office is awarding $111.8 million in grants to crime victim service providers across Ohio. Eliza Bryant Village received two separate awards totaling nearly $779,000. A continuation of the Villages’ core grant from last year of approximately $202,000 was awarded, along with a new grant to launch its Elder Justice Center, totaling approximately $577,000.

“At Eliza Bryant Village we believe aged adults have the right to live in a safe and secure environment where they are treated with dignity and respect,” said Danny R. Williams, JD, MNO, LNHA, President and Chief Executive Officer of Eliza Bryant Village. “This funding not only helps us launch a new service line, but also continues our 122 year-long legacy as an anchor institution in Cleveland’s Hough neighborhood meeting the evolving needs of our community’s most vulnerable elderly.”

At the beginning of 2017, the Village received its first-ever Victims of Crime Act (VOCA) grant from the Ohio Attorney General, and it was renewed for a second year.  The bulk of the funding is for programming shown to be beneficial for seniors who have been a victim of crime, violence, abuse and/or trauma during their lifetimes. An initial survey conducted at the Village indicated that more than 80 percent of seniors served at the Village self-identified as a victim of some type of trauma, abuse, or violence during their lifetime.

Unfortunately, the victimizing of older adults is a growing local and national trend. Below is a sample of more staggering statistics that highlight the critical need for supportive services:

Danielle Sydnor, Chair of the Eliza Bryant Village Board of Trustees, said “The support of our Ohio Attorney General’s office has been key to the start of us addressing abuse, trauma and violence on a more comprehensive and therapeutic level. We are encouraged that this issue has caught the attention of the nation’s leaders and we look forward to making a valuable contribution in Cleveland and beyond.”

“Over the 18 months since the inception of our VOCA program at Eliza Bryant Village, we have become more acutely aware of the pervasiveness of abuse among seniors and the various types of violence and abuse they experience,” said Williams. “We are excited to be at the forefront of this crisis, providing help and safety to those in need.”