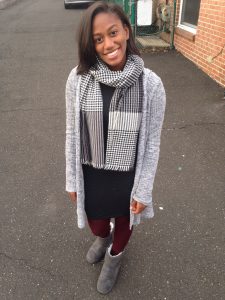 Over the last year, Ms. Hannah Clarke has devoted nearly 20 hours of companionship and friendship to seniors in the Skilled Nursing Home. Along with other students from Case Western Reserve University, Hannah visits every Saturday throughout the semester to serve as a Friendly Visitor to seniors at Eliza Bryant Village. Since beginning in February 2018, Hannah has always displayed a very c ompassionate spirit and natural enthusiasm towards the two seniors she visits. She serves as a resource for the Eliza Bryant Village Volunteer Program as she brings about a great understanding of how to best engage seniors of all ages, abilities and interests. Read more about Hannah’s service journey as a Friendly Visitor at Eliza Bryant Village.

Tell us a little about yourself.
“I was raised in Philadelphia, but now live in Cleveland as a sophomore at Case Western Reserve University. I am studying French, pre-medicine and public health. I find it so interesting to examine the root causes of health disparities and the social determinants of health”.

What motivated you to volunteer at Eliza Bryant Village?
“As a child, I would visit the nursing home with my mother, so I developed a high level of comfort with the elderly. In Philadelphia, I was a hospice volunteer, so when I moved to Cleveland I was looking for an opportunity to do something similar. When I found out about Eliza Bryant Village, I was drawn to the friendly visit program, so I’ve been volunteering ever since”.

What surprised you the most about working with seniors at Eliza Bryant Village?
“I was surprised that sometimes, even the least talkative of residents have days that they converse for an entire half hour. They may make jokes or tell you about their childhood or even ask you questions about your life”.

What have you learned about yourself while volunteering at Eliza Bryant Village?
“While volunteering with non-verbal residents, I have learned that I can still talk to someone, even if they don’t respond; it’s just a matter of getting creative. I learned that it’s not as hard as one may think to find ways to keep a conversation going with someone who is unable to verbally respond. I usually look to head and hand gestures as cues”.

Why should others support Eliza Bryant Village through volunteerism?
“Volunteering at EBV is a rewarding experience that is like none other. Volunteers get a unique look at Cleveland through the eyes of wise, insightful and witty seniors. They have so many experiences to share, but they just need someone to share them with! That’s where volunteers come in”.

We are truly thankful to have Hannah Clarke as a volunteer! And we look forward to watching her continue to strengthen and build new relationships with seniors in our care!

For the past year, Mrs. Cheryl Free has lent a much needed hand to Eliza Bryant Village’s Human Resource Department. Her willingness to learn and ability to catch on quickly made her successful in many of the projects Monica Priester, Director of Human Resources & Labor Relations, assigned to her. As a volunteer in our Human Resources Department, Mrs. Free is responsible for reorganizing personnel files to ensure updated records, researching uniform companies and revising departmental policies and procedures to reflect updated best practices.

Mrs. Free was first introduced to this opportunity at Eliza Bryant Village through The National Caucus & Center on Black Aging, Inc. (NCBA). She learned about the Senior Community Service Employment Program (SCSEP) offered at NCBA through a friend and decided to sign up. The SCSEP program provides employment training and placement services to those over the age of 65 seeking to return to work at a nonprofit, faith-based and/or senior center organization.  Eliza Bryant Village has partnered with NCBA for over 5 years, providing training opportunities through volunteerism for older adults.

In July 2017, Mrs. Free was matched with Eliza Bryant Village because of her prior experience working at senior care facilities and skills in health service administration. Mrs. Free was already pretty familiar with the work of Eliza Bryant Village as she passed by on her way to church every Sunday for the past 10 years. She was excited to work for an organization with a great historical presence in the community and with an opportunity that would help drive her career in human resources.

Mrs. Free has enjoyed her work in Human Resources so far. She expressed that she has already developed essential skills in Microsoft Office and increased her typing speed. For Mrs. Free, human resources is always a learning experience. She recommends anyone seeking an opportunity to grow personally or professionally to volunteer at Eliza Bryant Village.

As we continue to work with Mrs. Free, we have found her skills to be useful in other administrative offices including the Skilled Nursing Home, Development & Marketing and the Business Office. She is open to assisting where she is most needed at any time which is beneficial to our work at Eliza Bryant Village. Mrs. Free continues to be an asset to our work in Village and a great example of how strategic partnerships with organizations such as NCBA not only allows us to meet our needs but also the needs of older adults throughout the Greater Cleveland community. 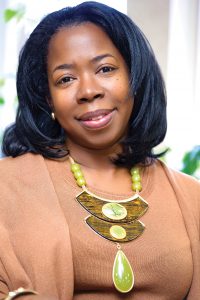 Life changed for Mrs. Earline Jackson in 2004. She was diagnosed with POTS syndrome, a condition causing lightheadness and fainting that ultimately affected her ability to complete simple tasks such as standing and walking.

What once required little effort on her part was now a huge task she faced every day. She was forced to retire early from the Cleveland Police Department, after serving as a Police Officer for more than 17 years. In 2006, she learned that her father, Mr. Earl W. Robinson, was diagnosed with Stage 4 Terminal Cancer and given a short life expectancy. The family transferred him to Eliza Bryant Village because of the close proximity to his old residence at Lexington Village Apartments.

Determined to be with her father every day, Mrs. Jackson slowly regained her ability to stand and walk. In due time, she was able to drive to Eliza Bryant Village to visit and talk with her dad. The more she visited her father, the more she found herself developing close relationships with the other residents in the Village. In 2007, her father passed away.

While the main purpose for her visits was her father, she felt an obligation to continue visiting the residents in the Village since she was often the only visitor they would receive. She would sit with them, reading the bible, giving out birthday gifts, playing cards, or just talking. Soon, the group of residents she visited grew and their schedules made it hard for her to see them all each visit. She eventually reached out to the Activity Director and started hosting bible studies and the ever-popular, Bible Bingo, during their activity time as a way to see them all at once.

Almost 13 years later, Mrs. Jackson continues to host bible study and Bingo every Wednesday, with a much larger crowd and many new faces. “The residents are my adopted family,” says Mrs. Jackson. At times, she brings along her daughter and 2-year old grandson, affectionately known by the residents as “CJ”, to assist her. It is the support of her family, friends such as Bryonna Robinson and Lisa Caldwell-Assimiou, and church, New Sardis Primitive Baptist Church, to which she attributes to her ability to continue her “ministry” through their generous donation of Bingo prizes and time.

“I learned during my sickness to ‘give people their flowers now’. I was so caught up in my own life before my illness that I never thought of what I could do for others outside the scope of my family. My ministry here at Eliza Bryant Village started before I even knew it.”

Volunteers such as Mrs. Earline Jackson have been, and will always be, a major cornerstone in the success and growth experienced at Eliza Bryant Village. They possess the power to touch our seniors’ hearts in their sunset years, giving them memories they will always cherish. Each year, the Village hosts more than 100 volunteers from the community in one-time and ongoing opportunities to assist in everyday activities ranging from bible bingo with residents in the Nursing Home to Spring cleanup.  Perhaps you have a gift to share.